Dhara Consulting Group, a Federal IT services and solutions company delivering secure, innovative technology, and information management solutions to the US Federal Government customers, announced that Paul Strasser has joined them as strategic Advisor and as part of their Advisory Board (AB).

Mr.Strasser has the proven expertise in Federal Government contracting and executive accomplishments. We are very excited to receive his mentorship and look forward to business growth. -Sastry Dhara, President/CEO

Prior to founding GovCon Growth Advisors, Mr. Strasser was the Chief Executive Officer (CEO) of Brillient Corporation. During his two-year tenure with Brillient, the company grew revenue organically, three times, to over $100M. Strasser joined Brillient as President in 2019 after leading Data Systems Analysts’ (DSA’s) Information Management Solutions Group as Executive Vice President. At DSA, he also served as President and CEO of Project Performance Company, LLC (PPC), a wholly owned subsidiary of Data Systems Analysts (DSA), following the acquisition of PPC by DSA in 2017. Strasser, working with FedCap Partners, led the sale of PPC to DSA. Prior to DSA, Strasser served as President and Chief Executive Officer of PPC, a twenty-five-year-old, IT Solutions company. There he successfully led PPC to growth in high-end Information Technology (IT) solutions prior to the sale to DSA in 2017.

His prior 28 years in technical and senior management positions included being the Chief Operating Officer at Pragmatics (2004-2010), VP for Titan Corporation and legacy companies (1994-2004), and software and systems engineer at various companies including Lockheed Missiles and Space.

Strasser has a Bachelor of Science degree in Meteorology with minors in Astronomy and Marine Sciences. He earned a graduate certificate in Information Systems Management from the University of Southern California.

Active in several Industry Associations, including AFCEA and IAC, he currently serves on the ACT-IAC Executive Committee as Past Chair having been Chair in 2019/2020. He has served on the Executive Committee for over six years and in 2017 served as Vice Chair for Finance. Previously, he served on the boards at GEIA (as Vice Chairman), ITAA, and TechAmerica, where his board service including the audit and finance committees.

In 2013 and 2020, Mr. Strasser was honored to receive a Federal 100 Award for work in Information Sharing supporting the Department of Homeland Security (DHS) and for his work supporting government-wide initiatives at ACT-IAC, respectively.

About Dhara Consulting Group
Dhara Consulting Group (DHARA) is a 100% minority-owned small business offering leading-edge engineering and IT services to Federal, Defense and Intelligence Community (IC) clients. Our clients include State Department, US Air Force and IC clients. Our clients face rapid change and disruption as digital services take hold. Our clients manage large, complex, mission-critical IT investments such as State Department’s Consular Posts in every major country. As they embark on their change journeys, they look to DHARA to bring innovations tempered with stability of their investments. DHARA engineers and architects act as trusted advisors to our clients in helping them make the right choices and implement them to achieve tangible outcomes. Our services include an ever-expanding portfolio: Large database engineering, multi-int fusion, C4ISR support, Artificial Intelligence, Semi-supervised Machine Learning, Cloud Computing, DevSecOps and Cyber Security. 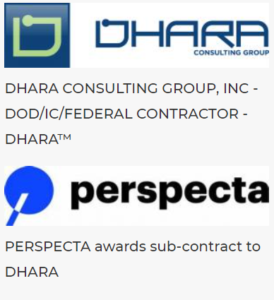